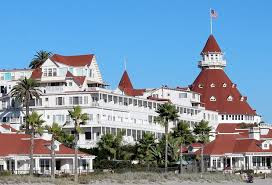 I LOVE a good tradition.  Coronado Island for the Fourth of July has been a part of my family's tradition for as long as I can remember.  Uncle JB has been organizing this trip to the golden speckled beaches of Coronado for at least 35 years --  coming to the magical Hotel Del Coronado with it's fabulous red roof and white walled grounds.  Ahh, there's really nothing better than escaping the oven of Phoenix, AZ and five hours later rolling down your windows to 75 degree temps and cool ocean breezes as your turn the corner onto Orange Avenue.  It's as close as we get to heaven on earth every summer.

Along with this tradition comes the www.crowncityrun.com a 12K run that curves around the eastern side of the island with a start and finish in Tidelands Park.  The race used to be a half marathon, then it became a 15k and now, in honor of the 4th of July, it's a 12k -- 7.4 miles on 7/4.  Get it?! 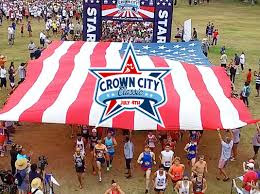 I have to say, this race is FUN!  The race directors have made so many improvements to this event. I love the packet pick up/registration which scans your name onto your bib number automatically instead of standing in lines for A-F or G-N.  You can walk up to any line to get your bib, eliminating those lines with no people in them and volunteers waiting around with nothing to do.
Another fun improvement: running under the huge American flag as you start the race!  The spectators hold the flag on each side of the start line and as the runners take off under the red, white and blue.  I felt like an elementary school kid who was playing under a big billowing parachute circle.  What a great way to get the crowd feeling pumped for the next seven miles.

And I will never forget the reading of the list of names of military servicemen and women who had died in the previous year on active duty.  The reading went on for much longer than I had anticipated and brought to light the sacrifices of our true American heroes who have given their own lives to make ours better.  The moment of silence was emotional and heartfelt.

The course is flat and fast, and I mean pancake flat with nary a bump in the road.  It winds around the golf course then out and back past the hotel and under the bridge to the awaiting Fourth of July crowds.  You can smell barbecue coals getting started as most of the park goers this day are here for the long haul.  They've set their picnic chairs out to spend their holiday playing on the edge of the sand and then getting prime views for the evening fireworks displays.
Put this race on your TO-DO list.  It's great way to burn some calories before you dive into the party food you'll be consuming all day.  I will continue to sign up for this race for as long as I can.  I love everything about it.  Thanks www.crowncityrun.com for outdoing yourself this year.  See you next year.  And stay classy, San Diego.