Concrete Jungle And The Best Marathon In The World 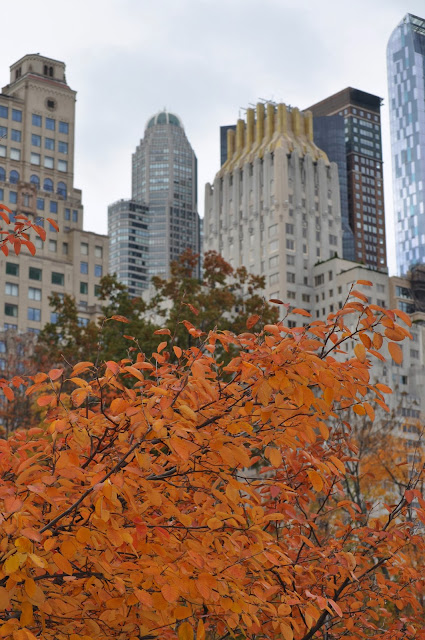 As I stood at the start line at the Verrazano-Narrows Bridge and heard the cannon boom to announce Orange Wave 3, I realized that my marathon story was just one of 50 thousand runners - each with a different journey and path but a similar goal and ending.

Mine started when I saw photos of a cousin complete his NY marathon many years ago.  He had his family with him in Central Park and he was wrapped in the Mylar blanket smiling away.  Then for my 40th birthday I traveled to NYC with friends and saw the street light banners advertising the marathon was coming the following week.  "Someday I'm gonna run that race," I thought to myself.

But someday turned in to a long wait.  I applied for the race in 2010.  New York Road Runners selects their entrants via lottery.  What did I have to lose?  But I did lose, again and again and again yearly.  Fortunately the marathon has a "three strikes you're in" policy, so I was automatically entered on my fourth attempt...2013. This year happened to also be the LOTOJA 200-mile remembrance ride for Rob Verhaaren.  My training days were rides, not runs.  And with just eight weeks between races, I geared up for the run and did my best. 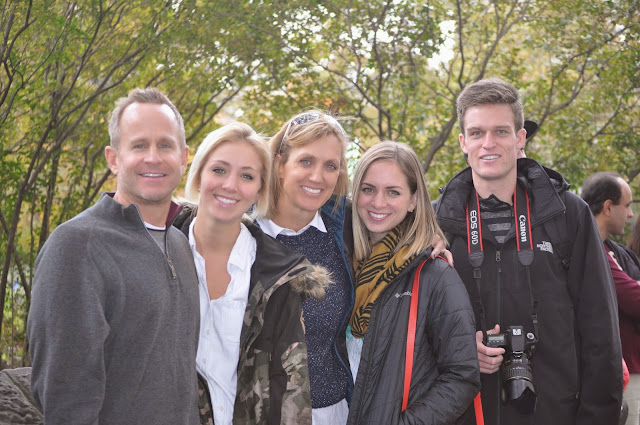 Day of race temperatures were cold and windy.  But that didn't deter the runners as we slowly started our journey across the longest suspension bridge in the world.  Our view of the New York skyline stood squarely in front of us.  "I can't believe I am here" is all I thought.  Several of the runners stopped to snap a photo.  Simply breathtaking. 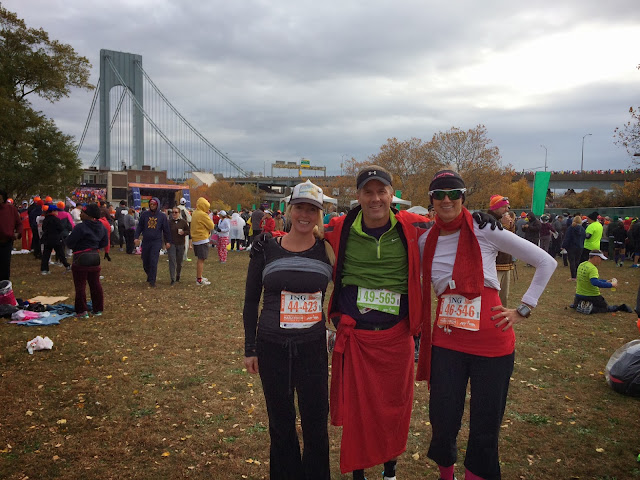 The next 26 miles did not disappoint.  Each borough we ran through greeted us loudly with cheers and screams and signs and music.  Brooklyn first, with high school bands, blues ensembles, heart pounding stereo systems -- I heard different music each mile.  There was no need to turn on my ipod, the sounds, the encouragement, and the human parade we had become left me with a smile on my face and a pep in my step.  I ran with Kyle, a friend from college, and Lori, a Mesa friend. Kyle and I chatted for the next 20 miles and caught up on family and lives all to the beat of each borough's heart and soul.


Every turn in the road provided new entertainment to keep the aches and pains from entering our minds.  The gospel choirs were one of my favorites.  Beautiful music streaming from the steps of the open-door churches.  What a boost of energy!  Then onto another street where Lady Marmalade played from the windows of a brownstone stereo.  I thought the Boston crowds were crazy - but the flavor of each neighborhood and the anticipation for what was next was like nothing I've ever experienced.

Besides the peaceful moments on the bridges, the only time I could hear silence was in the Jewish neighborhoods, where everyone was a bit more somber.  The men were dressed in typical Hasidic clothing with tall hats, prayer shawls, and long wring lets and beards.  It seemed to me that they were trying to pretend there wasn't a marathon caravaning through their streets at all -- just business as usual.  But those quiet minutes soon ended as mile 16 approached -- 10 more miles to go with an even larger gathering of spectators.  I recharged my energy here with high fives from the crowd.  An another much needed boost of rejuvenation. 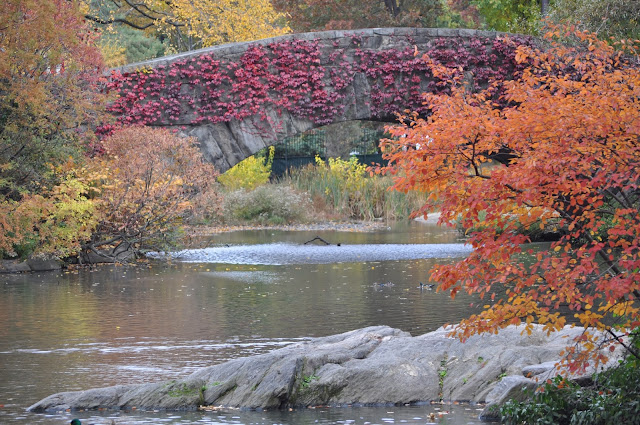 I knew I was getting close to the finish as the golden leaves from the trees in Central Park started peeking through the skyline above me.  The beautiful reds, oranges, yellows and browns reminded me of the beauty the most famous park in the world.  Central Park was packed with spectators.  And what a spectacular contrast to the concrete jungle we had weaved through for 23 miles.  My family was screaming and yelling for me at Mile 25.  One more mile and I.  Was.  Finished.  Wow. 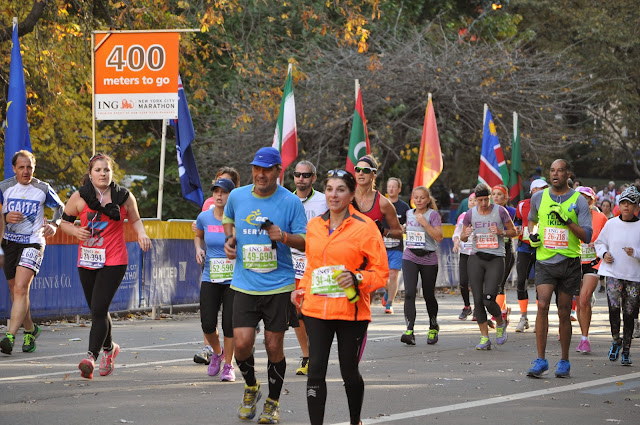 Medal, recovery food, Mylar blanket and hooded cape.  I walked another 40 blocks to finally meet up with friends.  Boston 2013 has changed the world and security was tight -- Counter terrorism officers, bomb sniffing dogs, and metal detector wands were all part of the scene.  But the experience for me was beyond anything I have ever done in my life. 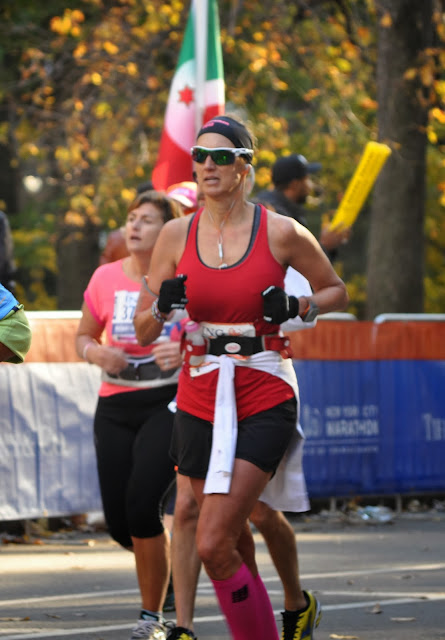 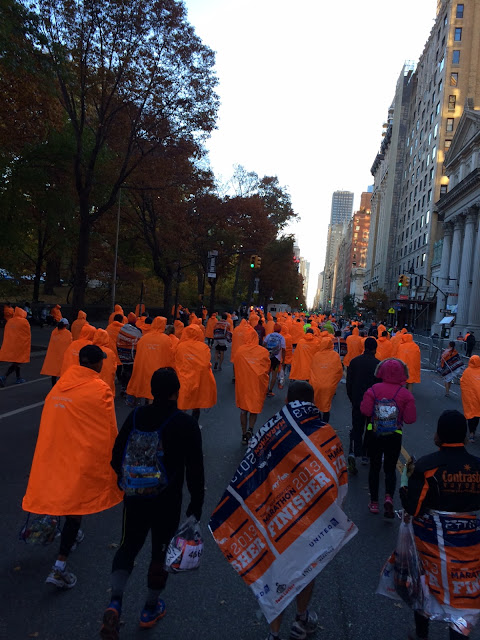 New York did me right.  The culture, the shows, the food, (oh the food!), along with the BEST marathon I've ever been a part of, all meshed into one great highlight in my life.  I'm not sure what would top this weekend - except coming back as a spectator to watch my kids run the race.  But for now, I'm walking like a zombie, starting a load of laundry, and reality is setting in - after I look at these photos for just a few more minutes... 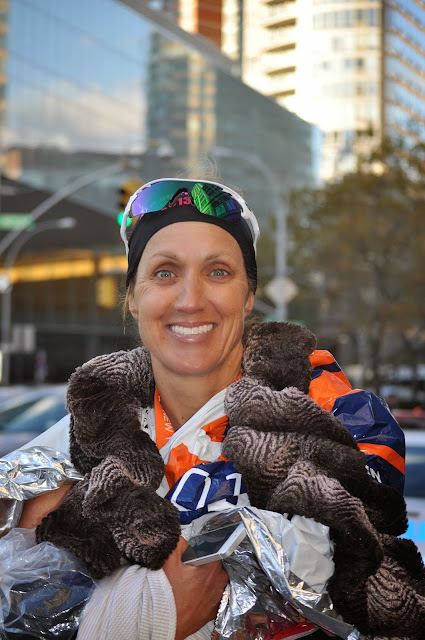