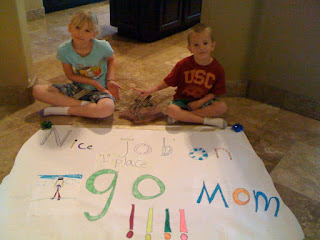 Helena and Karl tell it like it is!
19th El Tour de Phoenix

April 10, 2010
26 Mile Event
Women’s Title - Bridget Verhaaren - 1:14:44
(Four minutes and thirty-nine seconds faster than the  previous course record.)
I asked Bridget, a Gorilla Multisport Athlete and mother of three, to give a recap of her record breaking Tour de Phoenix victory last month.  Here is what she had to say...
I registered for the 26 mile event at the race expo--the day before the race.  I waffled on whether to register, since my husband, Rob, would be unable to ride this year’s event.  He would be attending a scout campout.  Rob pulled me last year on the 72 Mile Race, and it was so nice to rely on his strong pull to get me to the finish line.

I decided to ride the race on my own.  I hadn’t really “trained” specifically for this event.  However, I rode three times a week, through the Arizona Winter months -- and it is cold at 5a.m.  (Upper 30’s - Mid 40’s)
The morning of the race, I enjoyed the extra sleep. The 26 Mile Race began at 8:45 a.m.!  I took a bath, to loosen up my legs.  I drove to the starting line, pulled my bike out of the car, and thought, “This is a little weird to be here without my family or any of my training partners.”  I was the first to arrive at the starting line.
The weather was beautiful!  No arm warmers needed.  As people arrived, I learned of their previous races.  I abhor the race countdown.  I tried not to get too amped.  When the national anthem began, I looked down and realized I still had my toe warmers on.  Yikes!  I didn’t want to get “hot feet”.  I unclipped, took off the toe warmers, while my legs were shaking.  I was getting nervous.  Then, the race organizer, greeted last year’s female winner, Randi Najac.  She was near me, so I said hello, and wished her luck.
The horn blew and we were off.  My legs were shaking so much that I had difficulty getting my left foot clipped in.  I told myself to just relax, and stay on the wheel of the guy in front of me.  I was able to stay with the first pack heading North on Power Road.  Bless the policemen who waved us through the lights!  I did not get out to the very front to pull until we were nearly cresting Kong.  I stayed right on the wheel of the guy in front of me, and when he moved to the side, for my turn to pull, I was fortunate, because a group of guys barreled from behind and headed down Kong’s descent.  I was able to stay with the pack until the climb up Little Kong.  Blast it, I got dropped.  However, I managed to stay on “Lemonade Shorts” guy’s wheel, up Little Kong.  He pulled me a ways and then we worked together until the four way stop and the beginning of backside.  He pulled me up 2/3 of backside, at speeds, I have NEVER climbed before (12-14 mph).  (At this point in the race, I continually told myself over and over to relax and not blow up.)
Backside, is the point in which the 72 Mile and the 26 Mile Race converge.  Lemonade Shorts was picking tired riders off one by one.  He dropped me the last 1/3 of the climb.  Somehow, I caught him at the top of backside (home court advantage, I knew what to expect, and he was an out-of-stater).  We worked together to catch the peloton forming ahead.  We caught them, pulled them, and then forged ahead.  We caught a strong female rider wearing a Bicycle Haus kit. The three of us worked together until the sprint for the finish.  I felt strong, I felt great!  The day was perfect --temperate weather, with no discernible breeze.
I found other Brumby Riders (local cycling group), and hung around listening to their race experiences.  Then, the results were posted, and whoa, I finished 8th overall in the 26 Mile Race, however, I was the 1st Female Finisher.  I quickly called Rob, who had zero cell coverage at Weaver’s Needle.  Bummer.  I stayed for the awards ceremony and received a trophy, a Conquistador-a!  I am 5'9 1/2" tall and 150 lbs.  I am an amazon in comparison to most of the thin, lithe, cyclists on the podium.  All body types allowed.
On Monday, April 12th, Perimeter Cycling issued a press release stating that I had set a new course record.  S-weet!
Posted by lorie at 5:38 PM