I'm running a marathon next Saturday. So, I've had a few things on my mind, as you can tell by last night's dream.  Here goes: 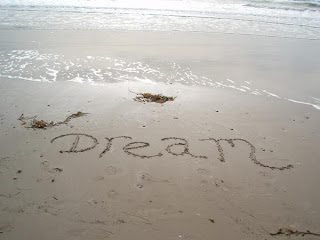 I got to the start line of the marathon in a surprisingly calm fashion.  Wow! I am so calm, I thought.  This is going to be great.  But then I looked around and saw that I had forgotten to pick up my friend from the airport who was running with me.  She was running as my pacer!  Now, what was I supposed to do?  I'm calm and cool, no big deal, I can do this, so I bellied on up to the starting line.


Upon the boom of the starting gun, I realized I had forgotten a few others things as well, namely my sports bra, running shoes and my race bib.  Oh well, I guess I can run without shoes, um, and a bra.  But in the confusion of looking for my shoes the runners had taken off without me and I was five minutes behind the lead pack.  Well, the only pack.  It was a very small marathon.


No problem.  I'll just catch them.  But seriously, my legs were moving like a man on the moon!  Why was my turn over so slow?  I couldn't seem to get. them. to. turn. over.  Ugh.  And the runners have run too far ahead for me to follow them.  I was lost but maybe I could catch up.


So I persisted.  But the straight one-road course I had thought I had signed up for was now a crazy maze through college campuses!  What the?  Every once in awhile I could see the pack of runners way over to the right of me, like they had made a u-turn somewhere and I still had to find it.  And they all had little pads of paper on their chests with their race number on them that they would peel off after every mile.  Me, I had nothin.


At mile two there was a lady that was handing out race numbers to people like me who had forgotten theirs.  But she was writing them on a tiny little price tag that I had to tie onto my body with string.  I stopped, got my number, and was off.  And then.....

Maybe I'm over-thinking this marathon thing.  I need a good night's sleep.  And a good race on Saturday.  Time to get rid of those demons and get to Boston.
Posted by lorie at 8:26 AM