Today was the the 12K Santa Run in Gilbert.  It was a good race.  Later start -- 10a.m., nice.  And they gave you a Santa hat when you registered.  Sounds great, right?  I thought so too, but running in a felt Santa hat = hot hat head.  I'm not sure how many people wore their hat for the entire race, but it was a no go for me. 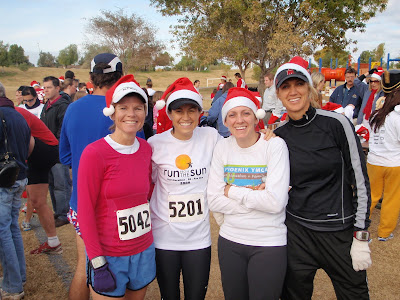 Here we are before the run.  Afterwards, we found out that Amy (far left) and Christy(next to her) took first and second in their age group.  Amanda (2nd from right) would have probably placed too, but she was a bandit.  Me, not so much.  But it was fun to drive the winners home.  Oh, and one more thing, Amy ran nine miles BEFORE she started the race, just to get in some extra training.  Sheesh!