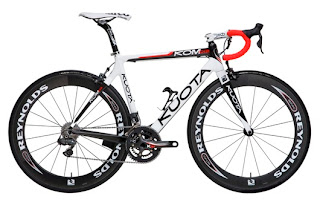 Yesterday, after the Iron Gear group ride, I jumped on my boss's new Kuota Kom with Di2 for a little spin and giggle.  I believe I saw him wince in pain and shake his head in regret when he saw me take off.

Of course the bike is light, around 16 pounds.  It's beautiful - it's shape and lines are sexy and aerodynamic.  But I was more interested in the new electronic shifting system -- the Di2 of the bike, that supposedly shifts the bike electronically, without a clunk or delay.

And I've got to say, I was impressed.  When I pressed the shifter it sounded like a bionic laser beam was moving the chain from gear to gear more efficiently than any componentry I've ever known.  Bzzzup, one gear up, buzzup, one gear down.  Just a light touch of the shifter and the chain moved so crisp and easy, like a electronic key card opening a hotel door.  There's a reason we don't have bulky hotel keys anymore, and there is now NO reason NOT to have electronic shifters on bikes.

Shimano says this: The Di2 7970 shifters are designed to feel like their mechanical counterparts, but the internal shift mechanisms have been replaced with small touch pads that will send an instantaneous message to the front dearailer, which houses the ultra small computer that controls the whole system, to shift. Potentially these pads could have been placed anywhere, but for the sake of easy transition, they were placed in the traditional location. The ability to place them anywhere will serve a better purpose in a TT bike setup though, where they’ll really make a difference. Both front and rear dearailers have servos, instead of springs, this allows the system to monitor shifts to ensure accurate and precise shifting each time. The system will also be able to adjust itself, so no more worrying about chain rub or cable tension.

Between you and me, I'm sold.  I've had a sentimental love affair with old Funky Girl, my Trek 5500, and GURU, my trusty tri bike, who's reliably carried me through three Ironmans.  But my eyes are starting to wander.  The Kuota Kom and especially the Di2, might be worth retiring my old friends for the new frontier of innovative, high-performance eletronic technology.  It's been a good ride my friends, but I'm ready to fly.
Posted by lorie at 4:00 PM