Bicycling Magazine listed a few nice tips on how to climb like a pro in their July edition.  And since we're all watching the best cyclists in the world ascend "Beyond Category" climbs these days,  I thought these tips were timely. 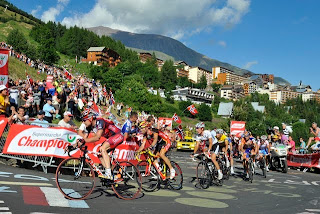 Photo credit: Cycling Weekly
#1  To ascend in a way that suits your style, you need to know your own climbing style.  Rhythm climbers are more comfortable maintaining their own pace and gradually changing speeds.  Jumpers enjoy varying the pace of a climb, alternating between out-of-the-saddle bursts and seated recovery.  Figure out which type you are and start to climb while maximizing your strengths; you'll be amazed at the improvement in your performance.

#2  To vary the exertion among muscle groups, occasionally slide slightly forward on your saddle as you climb and push directly down on the pedals, which uses your quads and hamstrings.  Then sometimes scoot backward and push against the pedals almost as if you're doing leg presses in a gym, which uses more of your glutes.

#3 *This is my favorite!   When you start to become fatigued or demoralized, anchor an imaginary bungee cord around a distant object such as a telephone pole or boulder, and concentrate on the image of the bungee pulling you to the object.