It Took Years for Me To Try Sushi. Now Soy?? 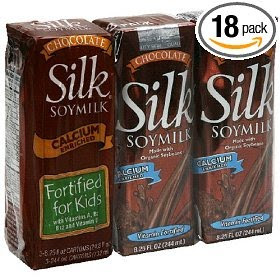 Recently I've been using Silk chocolate soy milk as a recovery drink after a long ride or run.  Believe me, I was skeptical regarding anything soy. Was it just another disgusting beverage I had to force down strictly for it's replenishing benefits?  I am not an adventurous eater.

I'm happy to say that Silk is really very good! Super chocolaty and .... silky!   I like it, hey Mikey!?!  Seriously, it is yum.  But besides being tasty, it does have some great benefits.

In 2009 scientests tested the effects of chocolate milk on nine male cyclists who did an energy depleting exercises session.  After each session they drank one of three test drinks halfway through a four-hour recovery period.  They then cycled in an endurance trial.  Eight of the nine subjects cycled for longer in the trial after drinking chocolate milk than after drinking Gatorade or Endurox.

The thing about chocolate soy milk, is it's a real food.  Drinking a sports drink is like putting vitamins in a glass of water.   While this is effective on the fly, using real food just has a greater overall benefit for the body.

Milk does a body good.  But chocolate does a body even better.
Posted by lorie at 2:11 PM