Today's post is by my good friend, Greg.  You remember him right? 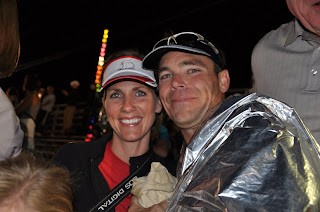 Ironman, marathoner, father of four and all-around good guy.  Greg's wife shared this story with me today and I just had to have Greg tell it in his own words.
I was doing a longer hill run in Irvine and I was just finishing a pretty significant continuous climb over about 5 miles.  Right before I get to this end of the climb this little fella just blows by me.  So a few seconds later he is waiting at the light and I stopped to hydrate and said hello.  He fired back, “Hi, I’m Bob” and he reached out.
Bob is about the size of my Jackson, (12 year old son) just maybe shorter, 4 foot something and maybe 80 lbs, and clearly over 50ish.  So he asks me where I am headed and I told him.  I shared that I am from Arizona and don’t always run here so I don’t really have my routes and mileage down.
Then he fires back without any hesitation, "Have you run through Peter's Canyon?"  I tell him that I haven't and he starts running around and summons me to get going.  "I'll take you through the park/canyon and pop you right out where you were headed anyway, but it is a much better run."  I didn't even have enough time to say no, and I found myself in lock step with him and we were off.  That was just the first amazing thing.
For the next hour I got to know the midget Tony Robbins.  I told him that I didn’t want to slow him down and he said just run comfortably and not to think about how fast I couldn’t go.  He tells me of the many marathons he has run.  He tells of the many high school kids he has coached.  He tells me of his 12-year attempt at trying to qualify for Boston and what finally did it for him was all mental  (great story in and of  itself).  He tells me of his friend that is running the LA marathon this year and that he is going to help pace him…he is 72.

We start talking, of course, about running and how I can be faster.  I tell him that running is one of three disciplines for me and how far I have come and where I am at.  Anyway,  I could go on, but he spends the next hour talking about goals.  He points out that in business I would never just sit back and hope things happen.  Running is no different.  Write down your short term and long term goals.  Be committed.  He gave me some pointers.  He tells his high school kids not to just hope to go sub 20, but to write down “19 something” and put it where you can see it every day.  He tells me the how many more years I have of improvement before the body catches up.

So after a fascinating hour of conversation on a gorgeous trail through a regional park, he is about to turn around and go back.  I tell him that there is not a chance in the world I am running Boston.  He looks at me as if to say  “Where have you been the last hour?”  He says,  "First of all Greg, you are a Boston guy, you just have to believe it."  He points out that the pace we did the last hour is the pace that I would need.  "If you can’t do it, you’re fooling me.  You just need to stop telling yourself that you are not that good of a runner and just enjoy it and you will do it.  Write down your goal, and you will do it.  You have to get out of your head that you can’t."
This was as good as any motivational seminar I have ever attended…all from a total stranger.  I had just spent the last hour on the trail with a guy that had more positive energy than anyone you could imagine.  He asks me when I will be back in town and if I would like some company on my next long run and we talk for maybe 20 seconds and he starts to head back.  As he pulls away, he yells back at me…”Remember Greg, if a midget can do it, you can too.  See ya!”
GA