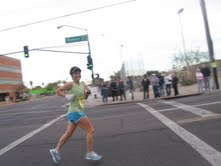 Training Plan You Followed:  A mix of an advanced marathon plan found on runnersworld.com and the pfitz 18/70 or 18/55 plan.  Can't remember which one.  The overall plan changed in the middle due to a 10 day layff I was forced to take (broken wrist).

Pre-Race Breakfast:  4:30a.m. bagel with Power Gel, and water.  I sipped Gatorade and water while I waited at the start line.  Left the house at 5:40a.m. and got dropped off at ASU to take the shuttle to the start line.  Arrived at start line around 6:45a.m.

Nutrition During Race:  I think I drank something at each aid station minus the first.  I usually alternated between water and Cytomax, which they provided.  However, I did start to feel I had ingested too much sugar.  At mile 13 and 22 ( I think) I had Power Gels. The second one I had to force down, due to nausea, but I wanted the energy. I still need to figure out the right combination.

Easiest...Hardest Part of the Marathon:  The easiest was the beginning, up until mile 16 or so.  At that point I was pretty much running alone and lost focus and concentration. Another hard part was the feeling of slowing down and not being able to get myself to go faster and hold pace.  Come to think of it, one of the hardest things to do is hold yourself back from going too fast in the beginning.**  I need to get better at that so I have more kick at the end.    ** You will see a pattern here over the next couple of days.

The PF Chang's Marathon Experience:   OK.  I think I prefer to do marathons at destinations other than my hometown.  It was really boring running the streets that I know so well, and knowing exactly how far I had to go.  I also think the band thing is overrated.  You really don't hear them that much and it just messes up hearing your own music.

Final Thoughts:  I just want to say that ALL the glory and honor to go God.  He has blessed me with the natural athletic ability as well as gifted me with the will, determination and perserverance that it takes to train for and run a marathon.